Philly Shipyard is a leading U.S. commercial shipyard constructing vessels for operation in the U.S. Jones Act market, which requires all commercial vessels transporting merchandise between ports in the United States to be built, owned, operated and manned by U.S. citizens and to be registered under the U.S. flag. Philly Shipyard possesses a state-of-the-art shipbuilding facility and has earned a reputation as the preferred provider of oceangoing merchant vessels.

Philly Shipyard, Inc. (PSI), a wholly-owned subsidiary of Philly Shipyard ASA (Oslo: PHLY), is pleased to announce that it has initiated construction

“Philly Shipyard is in advanced talks with a leading Jones Act operator to establish a new shipping service in the Hawaii containership trade with up to four new, state-of-the-art, cost-effective and environment-friendly vessels”

“These containerships will be the direct continuation of the series of two similar 3,600 TEU Aloha class containerships with expected deliveries in 2018 and 2019 that PSI is presently constructing for the Hawaii trade.”

Philly Shipyard has begun building up to four additional containerships for the Hawaii trade for its own
account and is presently engaged in advanced discussions with a major U.S. shipping operator concerning an order for these vessels

On 7 April 2017, the PHLY Annual General Meeting was held; all proposals were approved and no changes were made to the Board of Directors

On 18 April 2017, Philly Shipyard received USD 18.8 million in dividends from Philly Tankers AS following delivery in Q1 2017 of the second product tanker (Hull 026) to Kinder Morgan

PHILLY SHIPYARD ASA: PHILLY SHIPYARD SIGNS LETTER OF INTENT WITH A LEADING JONES ACT OPERATOR TO BUILD UP TO FOUR NEW CONTAINERSHIPS FOR THE HAWAII TR 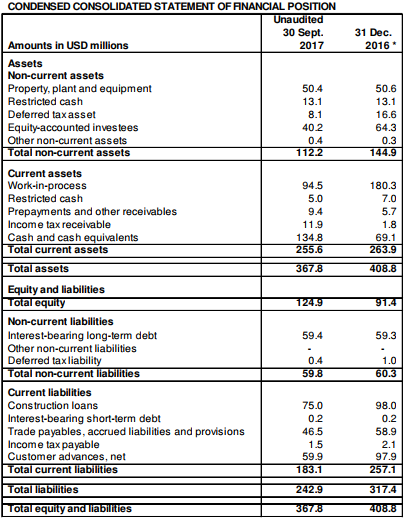